Hard to believe, I know, but not everyone feels compelled to write.

Yeah. I don’t get that either. Still, each to their own.

For those who do have an insatiable and unstoppable urge to write, the question becomes … why?

I was fortunate enough to hear a few authors talking about their journey to being published and was fascinated to find that most differed in what caused them to become published.

One such person was Steve Bisley. Steve is a knockabout Aussie actor who was raised in a typical ordinary Australian family. As an actor he has enjoyed a modestly successful but consistent career in television and on stage. He admitted that as an actor, one is always interpreting the words and works of others. It got to the stage where he decided to have a bash and write his own story.

As often happens, his first novel was autobiographical in nature in the sense that it was a rollicking recollection of stories from his childhood. He admits to never having a diary or anything but his own memory as a keen observer of life. He recalled an image and wrote it out. Steve took time out from acting to write and set a discipline of writing in longhand daily from 8.30 am and then typing it into Word. If he didn’t follow that discipline he feared the book would ‘go on’ and never be finished.

He did indeed finish, was published, and is now writing his next book. Interestingly he thought writing was tough doing his first book. Now he realises that was easy because he just had to resell his life’s stories. In his new venture, he is finding it much harder as it’s not autobiographical at all.

Steve wrote to express himself in a new creative way rather than being a vehicle for others voices. He is learning a whole new way of being in his mature years and is stimulated as well as humbled by the whole process.

Here’s a quote I grabbed from his talk that I believe is so true. 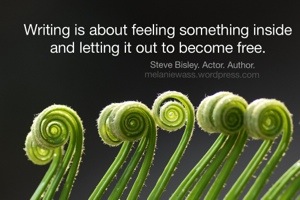